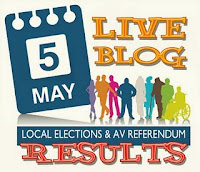 Welcome to the LiveChat which is a 5th May Election Special.

We kick off with the return of Question Time; which tonight comes from the last BBC option “damn I can’t claim decent expenses from here” of London.

On the panel we have Secretary of State for Transport and Conservative dark horse Philip Hammond, Andy Burnham, Paddy Pantsdown, Yasmin Alibhai-Brown and Douglas Murray. Really? Are the same dozen people always on speed-dial?

Immediately afterwards we have the local election results and lots of idle speculation about the result of the AV referendum.

Unfortunately we won’t get David Vance‘s result until Friday morning so the champagne will have to stay on ice.

As it’s such a big night we’re going to split the Chat tonight. If you want to take part in the QuestionTime and England/Wales/NI election results then this Chat is where you want to be. If you want a Scotland twist to your evening then use the Chat window in the post below.

The Chat tonight reflects the different voting areas, and is hosted on Biased-BBC, AllSeeingEye, MaxFarquar and QT stalwart Subrosa‘s blog. Moderating will be AllSeeingEye, Subrosa, Max Farquar and David Mosque, and both chats will go on until people fade away though tiredness or wine.