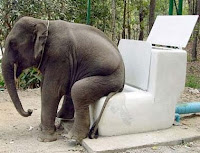 Time for a new platform for all the BBC related elephants in your rooms.

There is no Question Time this week, so the B-BBC LiveChat will return on the 5th May.