BBC Bias Favors Unions, Even In The US, And Censors News Of Violent Rhetoric

For the last couple of days, there have been major events in Wisconsin involving state government legislation intended to curtail public sector union entitlements in order to save money. Like several other states, Wisconsin faces a deep economic crisis and needs to save money and cut spending any way it can.

The newly installed Republican Governor, Scott Walker, has said that anyone who didn’t see this huge budget crunch coming must have been in a “coma”. He’s recently set forth a new budget plan with big spending cuts, including what gets spent on public sector unions. Needless to say, the unions are livid, and have taken to the streets.

The BBC reports it this way:

Wisconsin public employees have crowded into the state capitol to protest the government’s plan to curtail their right to collective bargaining.

Teachers, prison guards and others say a Republican-sponsored bill would severely cut into their incomes.

In case anyone might get suspicious about the obvious trade union talking point here – ‘cut into their incomes’ – all doubts are dispelled immediately:

In Madison, the capital city of the mid-western state, the Republican-led legislature on Thursday was set to pass a bill pushed by Republican Governor Scott Walker that has been described by commentators as the most aggressive anti-union law in the nation.

The bill would eliminate most public workers’ collective bargaining rights and dramatically increase the amount they must contribute to their pensions and health insurance coverage.

“This is the scariest thing I’ve ever seen,” physics teacher Betsy Barnard told the Wisconsin State Journal newspaper of Mr Walker’s bill. “This is going to change Wisconsin forever.”

“Dramatically increase”? Here’s what the BBC doesn’t want you to know about that:

Currently most state employees pay nothing toward their pensions and only a modest amount for their insurance.

Yeah, I suppose having to pay a little something when you’ve been paying zero might seem “dramatic”. But that’s the union perspective the BBC is presenting, and not an objective fact. The use of emotional language here is advocacy behavior and not journalism. And what about the claim that the bill will “eliminate most” bargaining rights?

Walker, remember, is not removing unions’ fundamental power to bargain for wages. He is demanding that state workers put 5.8% of their wages toward retirement and that they cover 12.6% of their health care premiums, which would still have them paying more than $100 less a month than the average schmoe. He is also proposing that elected officials determine the shape of employee benefits without having to bargain them, and this as much as the added cost has unions crying “unfair.”

More reality can be found here:

Unions still could represent workers, but could not seek pay increases above those pegged to the Consumer Price Index unless approved by a public referendum. Unions also could not force employees to pay dues and would have to hold annual votes to stay organized.

In exchange for bearing more costs and losing bargaining leverage, public employees were promised no furloughs or layoffs. Walker has threatened to order layoffs of up to 6,000 state workers if the measure does not pass.

Instead of reporting (or, hell, even copying and pasting from the wire service) objectively, the BBC uses the emotional language of union talking propaganda, quite dramatically misrepresenting reality.

Next the BBC reports on the actual protests:

With teachers – and some students – massing in Madison to protest, dozens of schools were shut on Wednesday and Thursday.

Hundreds of protesters spent Wednesday night in the rotunda of the state capitol building.

Police officers stood guard outside Mr Walker’s office as angry protesters stood outside shouting for his recall from office.

How did the students get there? Aren’t they supposed to be in school? Well, no, because the teachers’ union closed schools for the day and bused the students in for the cause (video proof here).

How angry were the protesters, BBC?

How did they find out his address? Simple: the unions gave it out and sent their workers to harass the man’s family. They also went to the home of the Republican Speaker of the House in Wisconsin. Yet the BBC wouldn’t dream of frowning at this behavior in the way they did at the Tea Party protests. Quite a contrast. No suggestion of violence or dark forces behind it all.

Police in Madison, Wisconsin, estimated that 20,000 people rallied at the capital on Wednesday.

And that’s it from the BBC. Here’s a video of these heroic people. Guess to whom they’re comparing the Governor of Wisconsin?

In case that’s not enough, there’s this: 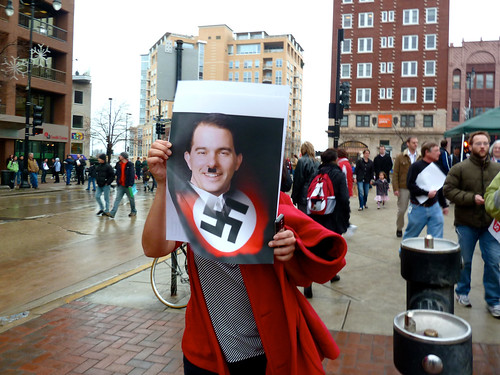 How about it, BBC? Any thoughts? You guys were oh, so critical when the odd Tea Party protester had a similar poster about The Obamessiah. What do you say now? Nothing, of course. Moving on…..

But Republicans, who were handed election victories in November in Wisconsin, say they have a mandate to cut government spending.

They say that despite the protests, voters approve of the cuts, which the Republicans say are needed to balance the state budget and avoid job losses.

Oh, those nasty Republicans, eh? Here’s what else the BBC doesn’t want you to know about what’s going in Wisconsin: a bunch of Democrat State Senators have gone AWOL because they don’t want to vote for it. If they voted against it, they’d show up. But they’re trying to boycott the vote instead. BBC: ZZzzzzzzzz

In sum: Biased in favor of the unions, use of emotional language which favors one side, censoring or misrepresenting of facts which harms the unions’ position. Don’t trust the BBC on US issues, or issues involving unions.

17 Responses to BBC Bias Favors Unions, Even In The US, And Censors News Of Violent Rhetoric