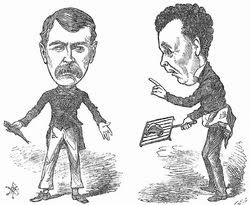 I see Roger Harrabin and Richard Black – both main environment reporters at the BBC – as a rather sinister version of a modern-day Box and Cox act. Roger does his bit, then up pops Richard, spouting from the same hymn sheet. And here, in type, and on time, is Richard Black – aided by BBC weatherman Darren Bett (and Met Office slave), who, in his own words, became an “environmental scientist” because he didn’t have the grades to become a doctor – softening us up to tell us that despite December being the coldest for a century, we are at the end of the warmest year on record. Actually, Mr Black and Mr Bett, despite your certainty that cold swallows don’t make summers, that’s not as open and shut as you so strongly claim. Try here, here, , here and here. Of course, reporters such as Mr Black and so-called scientists like Mr Bett don’t do such humble research or mention such doubts; they already know – in their greenie fervour and lofty towers – what the narrative is and will invariably be. A ray of hope, though, is here. Climate scare stories are on the decline. Could our very own Box and Cox be for the chop?

13 Responses to BOX AND COX