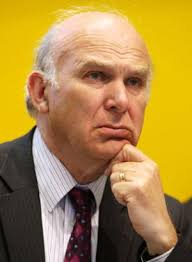 Well, Vince is their hero again. After a few months of begrudging, the BBC has returned to sing fulsome praise to Saint Vince Cable. There’s nothing like a bit of bashing business, nothing like an attack on the free market, to get BBC types all excited. Naturally, Saint Vince was on Today this morning and was given a soft ride on his planned socialist rhetoric at the Lib-Dem conference today. The BBC is hammering the theme that recession has been caused by “unbridled” capitalism and the “murky” decisions made in those dark boardrooms (Naturally, Government had nothing to do with it, oh no) and so Cable’s  wittering is convenient and so his hero status is restored. At a time when EVEN BBC poster boy Castro is having to embrace the free market, the BBC and it’s empty headed mouth-pieces such as Cable seek to demolish these freedoms.