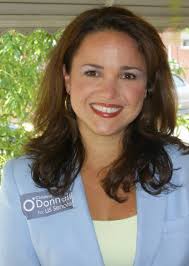 It was, of course, entirely predictable that the BBC would join in the left-wing attack on Christine O’Donnell. In an item entitled “A new broomstick”, the BBC indulges in the mockery of the new GOP Senatorial candidate. She is “a murky figure” apparently. Even worse she says evolution is “a theory”, oh and then again she believes masturbation to be unBiblical. That must REALLY gut the BBC. Can’t remember the BBC being quite as excited when Hillary Clinton revealed she talked to Eleanor Roosevelt. though they did get engaged when Nancy Reagan talked astrology! I have to say that I like O’Donnell, I admire the Tea Party  but she is getting the same treatment afforded to Sarah Palin. How vert DARE the electorate support these people?