Great to see that BBC Northern Ireland have been showing a programme called “Adams” tonight – plotting the “path to peace” chartered by Grizzly Adams. Yes, we discover tree-loving Gerry is a deep thinker who reached out to his enemies in order that we may all live in peace. Except, that is, for all those thousands murdered by the cut-throat gang of terrorists he commanded. Next week – Hitler – Champion of the Oppressed?

Interesting obituary being carried by the BBC on the death of Democrat Senator Robert Byrd.

We learn he was 92…that he was the longest serving Senator in Congress….that he was  suffering from bad health. Oh – and nine paragraphs later that he was a senior member of the Klu Klux Klan …although this was a youthful indiscretion….could have happened to anyone…..

The interminable legal wrangle over the non-release of the Balen report seems to hinge on whether it’s covered by an exemption from the FOI act on the grounds of being “for the purposes of journalism.”

The argument over whether ‘for the purposes of’ is the same as ‘actual’ journalism seems like dancing on the head of a pin.

Why does the BBC want to keep it secret? Surely it can only be because it harbours doubts about its own good practice at that time.

In any case much water has passed under many bridges since the BBC commissioned the report from Malcolm Balen in 2004.

It could be that they disagreed with the findings in the report and regretted commissioning it.

It could be that the BBC did stealth change their policy in some way in accordance with Balen’s findings, and hoped that would do. After the report they did create a new post. Middle East Editor. We all know what good that did.

It could be that the report wasn’t particularly conclusive, in which case the BBC’s efforts to conceal it would be more propitious as a grievance we can complain about, Palestinian style, than a revelation of whatever bias was detected by Mr. Balen.

There have been other detailed analyses of the BBC’s middle east coverage that have been ignored because they come from people who are regarded as having a vested interest. (Jews.)

One of the things people are particularly incensed about is the amount of the licence fee that the BBC has squandered in concealing it, thus drawing inordinate attention to the whole fiasco as well as wasting our money.

Pressure should be applied to the BBC to instigate a fresh report on the subject, framed in such a way that the outcome couldn’t be sheltered, either by the data protection act, an exclusion clause from the FOI act, or by or any silencing order devised by the likes of Carter Ruck.

Steven Sugar hasn’t given up. He’s contemplating an appeal to the Supreme Court.

Only on the GOP-hating BBC can one listen to an item which seeks to compare Richard Nixon to Caligula and which is openly contemptuous of George W Bush – all dressed up as a homage to the Roman historian Suetonius. 7.25am on Today. What a load of garbage from the Beeb

Well, football may not be coming home after all these years of hurt but a humiliated English team IS! I was amazed to hear on the BBC Today programme this morning that the “weak coalition government” is to blame, it was just before 8am but can’t find the link!

What is it with the BBC and the CERN particle collider? This bizarre report, by Katia Moskvitch, crows aggressively that this hugely expensive piece of boys’ toys kit is about to become the best in the world and to outdo the dastardly rival in (boo! hiss!)the United States. It reads more like a partisan cub reporter’s coverage of a footie match than a science feature. The reality is that our Katia is doing what the BBC does best: supporting the EU. She is cheering on the fact that CERN (the European Organisation for Nuclear Research) is an EU project, a monstrously expensive vanity project paid for by our cash, and only in existence because the EU Commission, like all dictatorships, desperately wants kudos irrespective of cost or need. And the BBC – the EU’s equivalent of Pravda – willingly plays ball with the huge conceit. Since Hadron’s launch it has given wholly disproportionate, adulatory news coverage to the project. 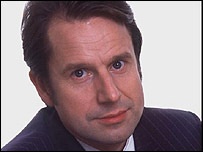 The BBC love him – just can’t get enough of him, in fact. I refer to the loathsome Jeremy Hardy. I was listening to “I’m Sorry I haven’t a clue” on the BBC earlier today (Still missing Humph) but it was spoilt by Hardy’s malign presence. Were that not bad enough, it was announced that fun-loving Jeremy has a new series starting later this week on Radio 4. Hardy is distinguished, if that is the right word, for his hard left political views. He suggested the Royal Family were parasites; he suggested that anyone voting for the BNP should be “shot in the head”; he supported alleged Irish terrorists – very much a thoroughly modern man. Laugh? I nearly paid my license fee.

Sorry for bringing up this topic again. I don’t care for daytime TV, but a couple of weeks ago I heard that one of the topics on The Big Questions was to be about the morality of Israel, so I switched on. Unfortunately something went wrong with the transmission near the beginning, and the rest of the episode, including the Israel topic, was abandoned.

As today’s B.Q. concerned Islam’s PR campaign, and curiosity led me to the programme’s online messageboard. I was interested to see that several of the comments concerning the missing B.Q. blamed a conspiracy. Zionists, they said, had scuppered it. There was some discussion about whether the debate that did take place could be uploaded onto i-player, but computer said no.

It could be that Israel’s case was heard at last. I gather from Jonathan Hoffman’s comment that it was a good debate. We’ll never know.

Over the last few decades the BBC has managed to turn Israel’s wrongness into a certainty. It’s established as a a given.
Therefore, unless it includes a caveat in acknowledgement of that certainty, every fact containing a whiff or a hint of evidence to the contrary is inadmissible. In the absence of a nod in the direction of Israel’s innate wrongness, every teeny fact-ette will be discounted as Zionist propaganda.

Similarly, in political and journalistic circles, the ‘two state solution’ has turned into a bizarre cliché. ‘Two States’ is now established as a *solution* as though it’s the definitive answer to a mathematical problem. But how is two states the solution? What will it solve?
The idea that giving the Palestinians what they want will solve everything is very nice and tidy in theory. But is that what they really, really want? zigazig-ha?

Hamas and other Islamist organisations say they want the removal of Israel altogether, and the annihilation of Jews everywhere. Would that be a satisfactory solution? Would that constitute full and final settlement?
Many very aggressive and angry people clearly want much more than that. Obviously not the P.R. Muslims on B.Q.; or the nice Muslims, or the real Muslims, or the Muslims that don’t live in the massive ‘Muslim lands’ surrounding Israel.

So let’s call a spade a spade. I suggest that the two state solution is renamed the two state experiment or the two state trial, like a medical trial, where they test the side-effects of a new medicine, and try to find out whether it cures the patient, or kills him.

And further, I suggest that whenever this trial or experiment is mentioned on the BBC, it isn’t always in the context of the certainty of Israel’s innate wrongness.

Hi folks – back from my short break and tuned in to watch the Kay Adams presented “Big Question”.  (Nicky Campbell must be off on a well deserved holiday, again) What a delight to know I am back in Blighty. This morning saw the following “issues” debated; “Is it time to get out of Afghanistan” followed by “Should we legalise and tax drugs” and then “Does Islam need better PR”   The bias in the audience was unbelievable – hard to imagine that this programme was actually recorded in the UK but then again, with the BBC as selectors of the audience, who can be in any way surprised?

The Weekend Starts Here.
Out with the old open thread and in with the new.