Radio Five Live whipped itself into quite a frenzy over the Chris Grayling rumpus. Stephen Nolan could hardly contain himself when the story broke during his show last night, admitting to the senior programme editor of Channel 4 News today that he was “ready to burst” waiting for the boxing to finish (not a pleasant image – can’t get Mr Creosote out of my mind for some reason). 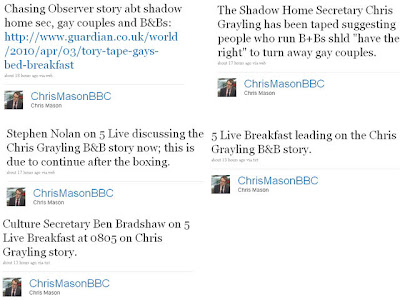 Anna Adams (“Interactive Reporter, BBC News”) was so excited she posted her first tweets in over a week. The story remained Five Live’s top headline until midday today (even the breaking news of three car bombs and dozens dead in Baghdad was deemed a lesser item on the 11am and 11.30 am bulletins). Unsurprisingly, the Tory Party’s widening lead in the opinion polls was not considered very newsworthy.

The fervour shown for this story by the Beeb (and particularly Five Live) suggests that there are a number of BBC journalists simply itching to give the Tories a good kicking. Unfortunately for them I don’t think most people are particularly bothered one way or the other by Grayling’s views on gays and B&Bs. Still, no doubt there will be other opportunities to stick the boot in between now and election day.

Update 2. And as of 10.30pm Sunday night it’s the number one headline on Radio Five Live again.