Further to my comment on the open thread about unintentional bias and moral superiority I just looked at Chas Newkey-Burden’s blog, and lo and behold, here’s an example.

Frankie Boyle has been mildly rebuked by the BBC Trust for a ‘joke’ he told a couple of years ago. It wasn’t even edgy and it wasn’t even funny; it was a cheap dig at Jews because of Israel, “an aggressive terrorist state with a nuclear arsenal.”
When he’s on the receiving end, Frankie Boyle, master of the nasty personal remark that passes for humour (as well as the occasional genuine humour,) he fails to take criticism on the chin.
His open letter is a blustering expression of pique with a saccharine topping. Attempting to justify his ‘joke’ he shows what an ignoramus he is, and too much of a smart arse to recognise his vast shortcomings.

The BBC Trust is a bit like a big cake; well, that cake’s being punched to pieces by a very angry very petulant very misguided Frankie Boyle.

It gives me great pleasure to declare this thread open.

An angry Biased BBC readers draw my attention to this nauseating example of how the BBC thinks.

“Please note the disgusting use of the phrase “renegade Germans” to describe German Jewish and non-Jewish refugees, some of whom were able to flee the evil Nazi fascist laws passed from 1933 onwards, which took away their jobs, possessions, savings, homes, careers and ultimately would have taken away their lives if they had not escaped. Renegade indeed!! Is the BBC bonkers? Is the Dalai Lama a renegade, or Nelson Mandela? It’s quite clearly an unpleasant term. Dictionary definitions include:  1. One who rejects a religion, cause, allegiance, or group for another; a deserter. 2. An outlaw; a rebel. Of, relating to, or resembling a renegade; traitorous.  To become a deserter or an outlaw.

As you know, I am standing in this UK General Election and as part of that process have been involved in several media events/debates, this morning one such took place at the BBC in Northern Ireland. You will all be pleased to know that I was introduced as a blogger who runs a site called “Biased BBC”. Nice to know they know we watch them. Sadly, there was no further discussion of BBC bias but there was plenty of evidence of it.

Islam was brought up to me an issue and I was challenged on a quote from A Tangled Web. Having canvassed thousands of Belfast doors by now, oddly enough this issue has not been brought up by ONE voter, but the BBC seemed disturbed to read that I take a very concerned view over a religion that has inspired some to commit 9/11, 7/7, and so many other horrors. I note that no other panellist had their personal opinions sought and questions asked related to Party policy. A dhimmified BBC might not like it but I felt obliged to point out that many people in the UK have issues over Islam and Jihad – this apparently classifies me as “a bigot”. I was also asked regarding Party Policy on Immigration and because my Party seeks a complete moratorium on Third World immigration until we deal the 1m + illegal immigrants already here, the insinuation of me being a racist was also planted.

One of the ways that BBC bias operates is that those who presenters do not like are bludgeoned virtually to death when they appear on programmes. UKIP ex-leader Nigel Farage is well able to look after himself, but this morning Evan Davis went flat out on Today to rubbish UKIP’s claims of being able to make £50 billion savings in public spending. On my count there were 16 interruptions in an exchange lasting no more than three minutes or so. Mr Farage ploughed on gamely, but the incredulity and scorn in Mr Davis’s voice was palpable; his main aim was to block Mr Farage from outlining his proposals in any detail. Of course, to Mr Davis and his cronies, the idea of not spending money on the EU and getting rid of qangos is almost a bigger crime than saying you don’t support gay rights.

Question Time this week comes Birmingham and will be, after a delay for the 10 O’Clock News, broadcast straight after the BBC’s stab at the 3rd Leaders’ Debate. It will be broadcast live so that both the audience and panel are able to comment on it.

On the panel tonight are Schools Secretary Ed “Blinky” Balls, BBC favourite St. Vince “I’ve predicted 17 of the last 2 recessions” Cable, the SNP leader Alex “Not playing with the big boys tonight” Salmond and the broadcaster and journalist Janet Street Porter. Please do not adjust your sets….yes, that really is her voice. As of 6:30pm when I typed this, the identity of the Conservative had not been confirmed.

For those playing B-BBC Buzzword Bingo this week, we’ll be playing by the “Foot In Mouth Rules“, meaning that “bigots” are wild, and those playing “Israeli Organ Havesting“, “Nazi Salute” and “Fake Nurses” don’t have to resign and sit out the rest of the game but those with “Clause28” do.

TheEye and David Mosque will be maintaining a two-party race, so vote None Of The Above here just after 10:30pm. 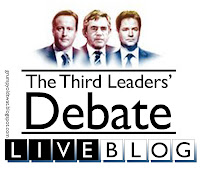 Tonight will be a live-blogging double-bill, starting with the second Leaders’ Debate and rounding off with Question Time and This Week.

The Leaders’ Debate is a joint LiveBlog collaboration with a host of other splendid blogs; here on Biased-BBC, and on All Seeing Eye, Barking Spider, Corrugated Soundbite, Dick Puddlecote, Governmentitus, GrumpyOldTwat, Man Widdicombe, Subrosa and The Red Rag. Ten blogs, one livechat! If you haven’t tried some of those other blogs before then please do – their authors have all been part of the B-BBC Question Time chat before so you’ll be right at home.

Moderators for this part of the evening will be AllSeeingEye, David Mosque and QT chat regular Daniel1979.

This Thursday evening again brings a double-bill of liveblogging….

“You lucky people”, as Tommy Trinder used to say.

First up at 8.30pm we will be live blogging the 3rd Leaders’ Debate which is being broadcast on the BBC between 8.30pm and 10:00pm. Rather like the last Debate chat this promises to be great fun as once again 10 blogs will all be hosting it simultaneously. Let’s see if Dimbleby will be as fair and balanced as he is on Question Time! Moderating again we’ll have David Mosque, AllSeeingEye and B-BBC QT-chat regular Daniel from Governmentitus.

This ‘chat’ collaboration will be between All Seeing Eye, Barking Spider, Biased-BBC, Corrugated Soundbite, Dick Puddlecote, Governmentitus, GrumpyOldTwat, Man Widdicombe, Subrosa and The Red Rag, – all excellent and highly recommended blogs. If you haven’t been to some of them before then please take this chance to try them out.

After a pause for breath we’ll be running our own regular chat for Question Time and This Week starting just before 10:45pm. Hopefully you can make both.

See you here on Thursday night!

I am sure that you, like me, will have been touched to read David Cameron assert that he is “pro-BBC”.

But the Tory leader told the Radio Times: “I’m probably the most pro-BBC Conservative leader there’s ever been.

Looks like we will have a job to do SHOULD Cameron get into power….