The Marxist theory of history, as studied in their rebellious youth by so many senior BBC people, emphasises the importance of economic factors and the relations between what were called ‘the forces of production’. From these relations and their associated class relations sprang all the other institutions of society – and even the consciousness of the individuals in each class.

As P J O’Rourke puts it : “As a philosophic recipe, marxism is a cannelloni of the economical, stuffed with economics, and cooked in economic sauce.“

Living in pre-Welfare State days, Marx and Engels devoted little thought to ‘the forces of consumption’ – non-productive individuals who consume scarce resources. In a previous B-BBC post I pointed out some of the demographic issues on which the BBC has been so strangely coy over the last 30 years.

The timebomb is serious, and makes the Government’s current credit crunch deficit look like small change. You can see a ‘population pyramid’ here – note the immediate post-war ‘blip’ of babies, then the great bulge born in the 50s and 60s. As that bulge moves into retirement over the next 25 years, the ratio of taxpayers to tax consumers (elderly people need more care and particularly more medical care) will fall. Where will the money come from to pay for their care ?

The Financial Times excellent Alphaville blog has an interesting (if depressing) post on the impact of demography upon government debt – and the ratio of government debt to gross domestic product (GDP) which is a rough measure of the capability of a country to repay its debt.

The unfavourable shift in dependency ratios, combined with sharply increased spending on pensions and healthcare is likely to cause a sustained deterioration in primary fiscal balances and a continuous increase in government debt to GDP ratios.

Translation : “Ageing populations will lead to an explosion in government debt over the long run“. 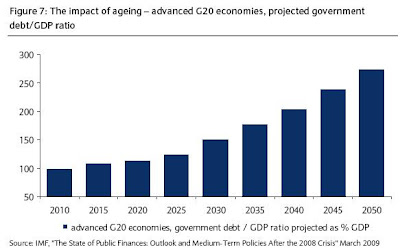 The cost of medical care is enormous, at 18% of the UK budget. Pensions and ‘social care’ account for around another 20%. The NHS bill is about to take off over the next two decades, as the boomers born between 1945 and 1965 move into retirement. Pressure to contain this budget will be enormous.

As the BBC’s pro-euthanasia campaign grinds on I can’t but think that some BBC editors and producers need to recall what they were taught or picked up from all those Politics and Sociology courses. We are moving into a period where governments, of any complexion, will be desperate to control rising health costs – and when, for the first time, the State broadcaster is running a continual stream of pro-euthanasia propaganda. To paraphrase Marx : “Follow the money”.