I’m not surprised at the level of UK scepticism as the main impacts of climate change are decades away and in other places. The problem is poor science awareness. We need to improve science education so people properly understand climate science.

So it’s the sceptics who need educating is it? 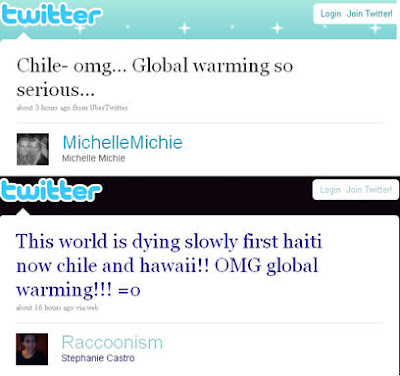 Update 17.30. Let’s not overlook the fact that it’s probably all about oil too.

Bishop Hill has an interesting post which reveals yet again the hardcore pro-climate change mindset at the BBC. The post is about a public discussion about the impact of Climategate, held at Oxford University on February 26 between environment journalists Richard Black (BBC), Fiona Harvey (FT), Ben Jackson(Sun) and David Adam(Guardian). Richard Black made relatively few contributions, but his first was this:

I’m not surprised at the level of UK scepticism as the main impacts of climate change are decades away and in other places. The problem is poor science awareness. We need to improve science education so people properly understand climate science.

Our man Black also made a contribution to the Q and A session at the end:

Q: I’m disturbed by the panel’s attitude. Scepticism is legitimate, denialism not. The events shouldn’t be called anything-Gate as that implied conspiracy and there was none. Why haven’t the media found out who stole the emails and wasn’t the timing of their release interesting?
DA: We can no longer call people deniers. We need a new term. Some people have suggested “climate creationists”.
FH: Sceptics were clever in choosing their name. We do need a new name, denier won’t work because of Holocaust associations.
Q: What was the influence of the blogosphere?
RB: probably bad.
FH: I’m astonished by the viciousness of anonymous people on the internet.

And there we have it. The BBC’s intrepid climate guru feels that the fact that the blogsphere exposed the lies of Climategate was a “bad” influence. His other answer betrayed starkly that he thinks that people don’t believe his constant propaganda because the impact of climate change is 30 years away. Oh, and if they are educated properly about “science”, they will start to believe climate change lies; that is to say, his audience are dumbos who need educating. That’s the BBC mindset, in glowing Technicolor.

[Update Wed March 3. I see the photo has caused quite a bit of discussion. Chris T-T is of course pissing in the wind asking for money, but on reflection I can see his point about use of the image. I too would be pretty angry if, for example, the BBC used a photo of mine without permission. Therefore, in the interests of reserving my right to occupy the high moral ground and go apeshit in similar circumstances, I’ve replaced the picture with a link. It was only ever incidental to the point being made anyway (I could have just as easily linked to the Brighton Theatre Royal’s own website). No doubt this’ll piss some of you off, but there it is.]

Further to my earlier post pointing out that The Now Show will be on three nights a week during the election campaign, I see that two of the regular cast – Marcus Brigstocke and Mitch Benn (along with other members of the BBC’s left-wing comedy establishment) – are in Brighton tonight (via Twitter)

Interestingly, the poster fails to mention what the event is for:

Proceeds from the gig will be going towards funding Caroline Lucas’ historic bid to become the UK’s first Green MP.

I guess the chances of hearing a Brigstocke rant or Mitch Benn song taking the piss out of the Green Party on Radio 4 are pretty low, then.

Update Sunday Feb 28. Response from Mitch Benn in the comments. He doesn’t endorse Lucas or the Green Party, but he supports them because they’re not the BNP. And Marcus speaks truth to power. Something like that.

(Here’s someone who likes leftie comedians but is unimpressed by their support for the Greens. Update. Link now password protected. Cached version here.)

If your fifteen year old son listened to two people talking on the radio, commented ‘I really want to punch that guy in the face‘, and you knew that one of the two people was UKIP’s Nigel Farage, what odds would you give that it was the other guy he wanted to punch ?

Congratulations to Steven Nolan for his impressive achievement on R5 tonight. Following on from the Question Time attacks, Nolan waded straight into the attack with the same theme (‘rude Nigel’) and interrupted Farage continually (‘No, you didn’t … that’s a lie ..”) to the point where it was hard for him to ever finish a sentence.

I was amused by the bit where Nolan kept repeating ‘what was Van Rumpuy doing between 1993 and 1997 ?’ – as if Nolan would have had a clue before the researchers gave him the notes.

If Nolan had wanted to attack rudeness, he could have tackled his compatriot Colin Murray, who a few minutes before had used a four-letter word to describe a Welsh rugby coach’s (imagined) half-time talk.

And on the subject of Question Time, I see BBC favourite Janet Street Porter attacked Farage for racism. Strangely, for such an anti-racist, Ms Street Porter left her native London and now chooses to live in a white and monocultural part of the UK. As, strangely, does BBC favourite Billy Bragg. Not to mention Woman Sour’s ‘Jeni’ Murray. Most odd.

(With apologies to David Vance, twenty-five years coverage of the Troubles gave me a bit of an allergy to highly opinionated Ulstermen who love the sound of their own voices – the Seventies in particular providing a surfeit of such. Radio 5 already has a perfectly good one in Alan (‘I don’t want to criticise the referee, but his performance tonight was abysmal‘) Green. Do we really need two more, or couldn’t we swap Murray and Nolan for Vance?)

Quite a good take on the BBC here…

“…the public has realised that there is also another BBC: a corporation that purports to be a public service but pays its Director-General a whopping £816,000 and its head of personnel more than the Prime Minister. It is an empire that schedules TV programmes to wrong-foot its rivals. Proposals seen by The Timeslook like a welcome recognition that the empire has gone too far, and should focus back on quality programming. But they actually constitute an evasive and artful strategy designed to keep the next government from intervening, while in reality changing very little.

In proposing to axe the BBC’s UK magazines, relinquish its hold on the teenage market, halve the size of its website and cut two radio stations, Director-General Mark Thompson presumably hopes to give the impression of embarking on a path of serious reform. But if he is serious about reform, he needs to do much more than axe a few radio stations that no one has ever listened to and websites that few have ever visited. The real giveaway in the proposals is that the BBC seems to have no plans to give anything back to licence-fee payers”

OK folks – here comes the weekend and here is the new Open Thread for your use!

See the BBC is bigging up the rich culture of communist hell hole Cuba. Matt Frei is there to highlight how ballet is the route from poverty to Covent Garden. I suppose the BBC’s love of the Castrol tyranny is understandable given the political sympathies of so many of the BBC luvvies. They love Castro like we love life.

Hi everyone! Been away for a few days but have been watching the propagandist drivel from the BBC and notice their excitement concerning our wicked MI5 officers and their poster boy, illegal Ethiopian immigrant Binyam Mohammad.They have seized on Lord Neuberger’s comments and turned them into their running campaign to have this Jihadist canonised. Wonder what you feel about it?

As someone who has tracked the BBC’s coverage of the EU for some time, Question Time last night from Cardiff was wearsomly predictable. Nigel Farage was bumped off last week’s programme from Teesside because the producers were worried that he would have made highly damaging remarks about how the EU was responsible for the closure of Corus steelworks. He was reinstated for last night’s edition. The audience was palpably strongly anti-UKIP (evidenced when they applauded loudly when gratutious insults were made against Mr Farage); and so, too, of course, were the four other panellists. The question chosen about UKIP was this:

Are Nigel Farage’s rude and attention seeking remarks about the President of the European Council not conclusive proof that UKIP and he have become nothing more than a boorish national embarrassment?

This showed breath-takingly deliberate (even by QT standards!), ad hominem bias against Mr Farage. Dimblebore proceded to shut Mr Farage up every time he made, or tried to make, a point in his defence. The exchange became a vicious tirade against both Mr Farage and his party. UKIP was treated exactly the same way that BNP was when it appeared. Mr Farage was called – variously – cartoonish, racist (by the boorish Janet Street-Porter), and a carictaure of himself, all without a breath of balance or attempt at intervention by Dimblebore, other than to say Mr Farage must take it all on the chin. All the while, the blood-crazed ‘audience’ jeered and booed at every opportunity.

UKIP’s appearance on this programme could and should have been an opportunity to discuss a substantive issue about the EU. Instead, the producers made it open season against both Mr Farage and his party. This was bias at its very worst.