In what appears to be a blatant bit of ratings tourism, Question Time tomorrow comes from Wootton Bassett and is set up to be completely devoted to the war in Afghanistan. The panel will consist of former head of the British Army General Sir Richard Dannatt, Shadow Foreign Secretary William Hague, and former News of the Screws editor Piers “Moron” Morgan (as Private Eye styles him). Armed Forces Minister Bill Rammell will be on, presumably to shield Bob Ainsworthless from the public, as will Salma Yaqoob, the leader of Respect.

George Galloway has already got his ha’pennyworth in the much ignored Swindon Advertiser saying that the panel is biased in favour of the war, and the local mayor is boycotting it because he wants to talk about something, indeed anything, else.

As usual, Biased-BBC will be hosting a live-chat on this blog to follow the discussion – chaired by our very own no-nonsense David Vance and with All Seeing Eye helping proceedings through to the end of This Week. For those playing QT Buzzword Bingo this week, we’ll be playing by the Pre-Election Rules where Thatcher‘s are wildcards and G20 scores double points. Good luck and see you here at 10:30pm! 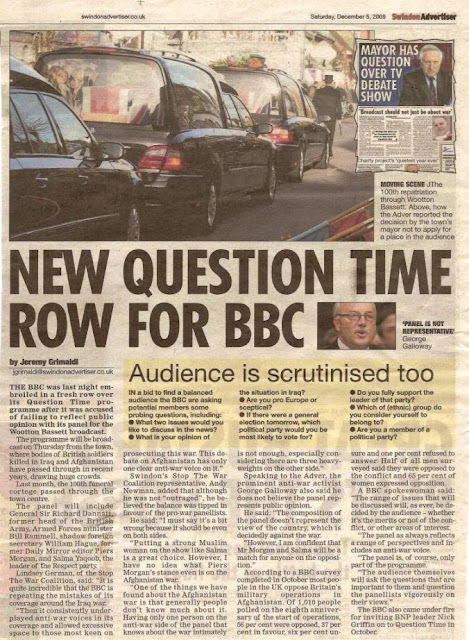