Further to Natalie’s post, and with a tip of the hat to Deegee in the comments there, I think it’s worth having a couple of screen grabs to compare the subtle difference in the headlines, and the way concerns over political correctness suddenly vanish where a Jewish American immigrant is concerned (click pic to view) : 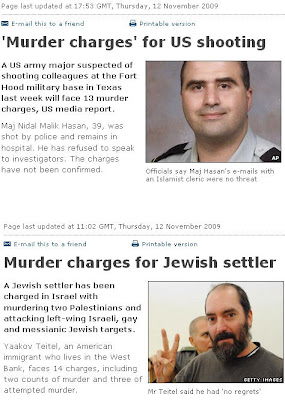 (Update – they’ve removed the quotes from the headline. Comparing the two I see the first draft was “US media report… not confirmed.” Fair enough in that case – my fault for not understanding the BBC’s often confusing conventions where quotes are concerned.)

Matt Frei has offered his take on the execution of John Allen Muhammad:

Despite the older man’s conversion to Islam, no-one really thought that the motive was religious, let alone that it was linked to the grievances of Islamic extremists…

When John Allen Muhammad died at 2111 on Tuesday evening, so did any chance of finding out what had really motivated him.

Frei doesn’t mention the decision by Muhammad’s family to suppress the release of his final letter:

In a statement read by the attorney representing the family of Muhammad, Charlene Paterson said, ‘this morning, the family would like to express remorse.”
She confirmed that the family is in possession of a letter, presumably from Muhammad, but said the contents of that letter would not be released.
“We have a letter. Right now we’re not prepared to disclose anything in that letter because it would be extremely inappropriate at this time.”
Paterson continued that, “the family is not comfortable disclosing any of the details in the letter at this time.”

There are of course a number of reasons why this letter could be “extremely inappropriate at this time”, but it’s not beyond the realms of possibility that Muhammad shared certain, ahem, ideological views similar to those of the Fort Hood killer.

Frei’s observations could turn out to be a tad Mardellesque in their presumption. Indeed, as Laban pointed out, there’s more than a little evidence to suggest Frei could be wrong already.

5 Responses to Re Motives