By DB | October 20, 2009 - 10:29 am |October 20, 2009 double standards, Phil Jupitus
Following on from BBC darling Jo Brand’s recent declaration that only white people can be racist, here’s another of the BBC’s favourite comedians, Phil Jupitus, expressing his ideological beliefs. This morning the ubiquitous BBC panel show guest shared with his twitter followers a photo of the lapel badges he’s wearing today: 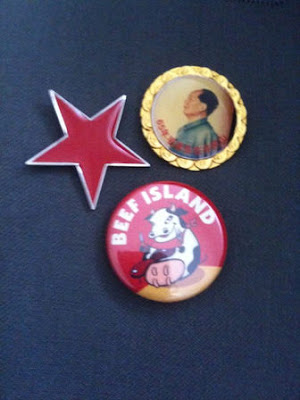 Chairman Mao and a red star. Aww, how sweet.

A BBC regular proudly displaying a Hitler badge and a swastika would soon see the programme invitations dry up, and rightly so. Lefties are held to different standards and are allowed to celebrate their communist mass-murdering heroes by claiming “retro irony” or some similar bullshit.

Update October 22. Jupitus responds. Hello to all you leftie tossers.