Chicago’s first round exit from the 2016 Olympic voting on Friday was greeted with a certain amount of glee by Rush Limbaugh. Echoing the song of praise to Obama made famous by a group of New Jersey school kids, Limbaugh told his radio audience:

On MSNBC’s Morning Joe yesterday the BBC’s Katty Kay, clearly missing the reference, was not impressed:

After, you know, listening to that Rush Limbaugh clip again and I don’t think I want to hear it, really, for a fourth or fifth time, is that it’s not Barack Obama, it’s Barack Hussein Obama, Barack Hussein Obama. There’s something insidious going on there, too, in the repetition of his middle name.

Limbaugh responded on his show yesterday:

RUSH: Just unbelievable. This is a member in good standing of the State-Controlled Media and she thinks I’m out there, “Barack Hussein Obama, mmm, mmm, mmm.” She does not realize that a bunch of school kids in New Jersey and across the country are being forced to learn songs and poems in praise of the dear leader such as…

RUSH: All right, that’s enough, that’s enough. Now, I must acknowledge that Katty Kay certainly does not watch Fox News, which is the only place the video aired. We aired the audio here, but she’s clueless. She has no idea of the story, zip, zero, nada. Katty Kay, BBC America, has no idea that schoolchildren across America are being propagandized and indoctrinated to support personally the dear leader, Barack Hussein Obama. So when I mock this and have fun with it, she thinks I am being derisive of insidious, insidious, insidious, I don’t want to hear Limbaugh again, I heard it four or five times, I don’t want to hear it again. Hey, Katty, try this.

At least Kay was wearing modest attire for her appearance on Morning Joe. She nearly got them out for the lads on the Chris Matthews Show the previous morning: 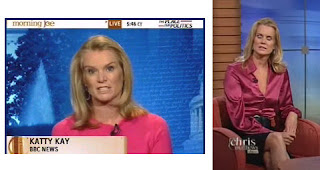 Update: Video of Limbaugh’s response to Kay, including the Rush Hudson Limbaugh song.