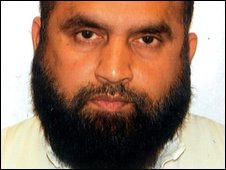 “A sex offender deemed to be a danger to women and children has absconded from a psychiatric unit in West Yorkshire. Mohammed Rafiq Passwala did not return to Fieldhead Hospital, near Wakefield, after being given unsupervised leave. Passwala, who was convicted of sex offences in 1996, is described as Asian, 5ft 7in tall, of stocky build with black/grey hair and a full beard.”

“Asian”, eh? Mmmm, I think there’s another word that the BBC appears to have overlooked.