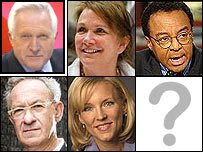 Moving on from Brand and Ross, it’s time to get the crystal balls out and predict who will be the mystery guest on tomorrow’s Question Time. At the moment it’s looking dangerously balanced: Elizabeth Edwards, a senior adviser on health care to the Barack Obama campaign; Simon (America has to choose: Obama or certain doom) Schama; Clarence Page (another Democrat); and Cheri Jacobus, a Republican political consultant and strategist based in Washington D.C. So only three to one against the Republicans at the moment! So who will be the fifth? And you can’t have Mchael Moore – I’m taking him. A pat on the back and a ‘jolly well done’ to anyone who gets it right.

UPDATE: It’s just occured to me that this might be unfair: the Beeb could, of course, be late announcing the fifth guest because they want to balance it but they don’t actually know any Republicans, in which case feel free to help them out with your suggestions….

UPDATE 2: They found one! After thinking long and hard and after much scouring of the Daily Kos and Huffington Post they found a whole bunch of Republicans working for that other guy in the Presidential race. Now all they had to do was pick one… “Look! Here’s one that’s related to Nixon – everyone knows he was a bad’n. He’s even got ‘Nixon’ in his name. Perfect!” And so the fifth panellist is… Christopher Nixon Cox, executive director of Senator McCain’s presidential campaign in New York. The show’s taking place tonight. In Washington.