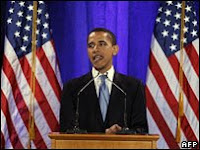 You have to admire the BBC’s devotion to Obama. Following the media firestorm ignited by the comments of Obama’s long standing spiritual guru, the Reverend “God damn America” Wright, the Senator has been forced into make further statements on his relationship with this raving bigot. Obama has desperately tried to dampen this down but has so far only succeeded in raising more questions. However the BBC drools over his speech with such comments as “It was a broad – some would say brave – point” and “it may have been too nuanced”. Best of all is the pay-off line “The Illinois senator is often accused of avoiding tough decisions; of skipping important votes. On this occasion, though, he did the presidential thing.” Pass the sick bucket! Obama has been forced into making these dissembling explanations. The idea that it is “Presidential” to damn America’s past may fit in with the endemic anti-Americanism motif that runs through the BBC, but were this a Republican candidate, does anyone think the BBC would be quite so charitable, quite so effusive in its desire to understand,? I don’t think so for a moment. The BBC is infatuated with the idea of a having a black left wing American President, (Although I can remember the BBC playing along with the idea that Bill Clinton was the first, wasn’t he?) and THAT is why it provides such gushing coverage of Obama’s shame.