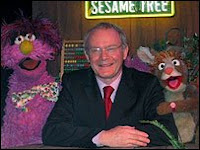 One of the areas of BBC activity that causes me most concern is its active role in sanitising terrorism. Take this charming photocall of IRA terrorist godfather Martin McGuinness sitting between Potto and Hilda. Who are Potto and Hilda? Well, they aren’t members of Sinn Fein (Then again..) but they the stars of the new BBC children’s programme, Sesame Tree, This local version of Sesame Street was launched in Belfast yesterday. The new series swaps the original New York street setting for the titular tree, and aims to showcase ..ugh…”diversity and promote respect and understanding”through the characters’ adventures with local schoolchildren. The programme is linked to the revised Northern Ireland statutory curriculum, and will encourage children to explore and appreciate the world around them.

Chuckle Brother McGuinness recently explained how he had wished to kill every British soldier in Londonderry back in 1972, and remains vague as to how many the IRA unit under his command actually DID kill. The way in which the BBC uses something as innocuous as a Sesame Street spin-off to help improve the image of a self-confessed IRA terrorist McGuinness is an absolute disgrace and it is a role that the local BBC here in Northern Ireland have turned into an art form. Our license-fee is funding aPR make-over for monsters such as McGuinnness.

57 Responses to TERRORIST GODFATHER KNOWS THE WAY TO SESAME STREET