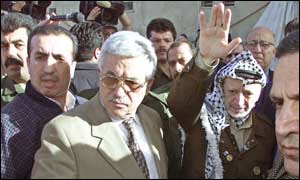 Interesting to read that exiled Palestinian terrorist leader George Habash has died. The BBC reports the death of this “radical” – an odd choice of word for a thug with the depraved pedigree Habash carries. In fairness the BBC does make clear that this anti-Semitic thug always advocated violence against Israel, a tradition which Arafat – who the BBC canonised – enthusiastically followed. But here is the stinger; given his murderous track record that is so bad that even the BBC cannot sanitise it – Al Beeb then points out that Mahmoud Abbas – that much vaunted “partner for peace” in the current Middle East political process – has declared three days of national mourning for Habash. Wiping tears from his eyes no doubt, Abbas also described him as a a “historic” leader. I’m sure the next of kin of those many Israelis who lost their lives at the hands of Habash and his terrorist gang may have another word for him

The bit that annoys me is why the BBC continually portrays Abbas as “a moderate” when he is in reality a notorious holocaust denier, a lifetime associate of Arafat the terrorist godfather, and an admirer of the unlamented George Habash, the man who dedicated his wretched life to killing Jews. Words matter and the use of terms like “radical” and “moderate” to describe extremist thugs like Habash and Abbas is inaccurate. It’s like saying Hitler was a “radical” but Goebbels was more of a “moderate”. It’s a matter of degree, and whether it’s Habash, Arafat or Abbas, these guys are terrorist thugs in the first degree.

Additional link posted by Natalie: I was going to post a link to the following story separately, but since it is so closely linked to the topic of David’s post I hope he won’t mind me adding it here: Remember that picture of Yasser Arafat, blood donor? Here is the BBC story mentioned in Scott Johnson’s article.

15 Responses to RADICAL VS MODERATE!